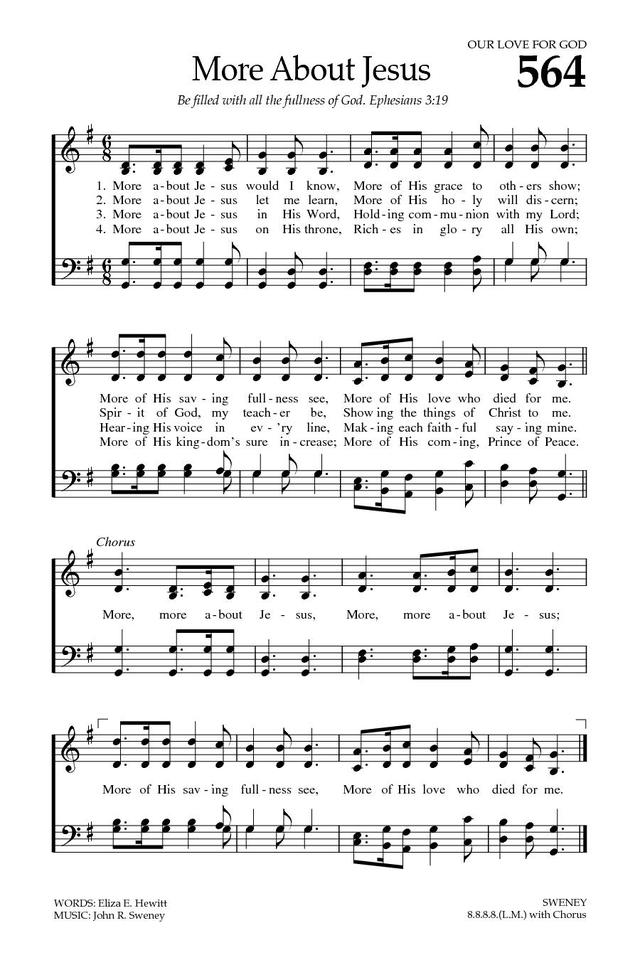 More about Jesus let me learn,
More of His holy will discern;
Spirit of God my teacher be,
Showing the things of Christ to me.

More about Jesus; in His Word,
Holding communion with my Lord;
Hearing His voice in every line,
Making each faithful saying mine.

More about Jesus; on His throne,
Riches in glory all His own;
More of His kingdom’s sure increase;
More of His coming, Prince of Peace.

There is a distinct theological difference, that has significant implications, between “More” and “Total.”  Over recent years, and up to 2022 there has been no lack of books, sermons, articles, and blogs on the theme of “Commitment” or “Total Commitment,” or “Totally Committed.”[2]. When you read the same books, you think the same thoughts!

First of all, I understand the concept of being committed to Christ.  Who would argue the position that a believer should not be committed to our Lord?  Just ask Peter!

“Peter said unto him, Though I should die with thee, yet will I not deny thee. Likewise also said all the disciples.”

I have always been taken back by the hymn, “Are Ye Able!”

“Are ye able,” said the Master,
“To be crucified with me?”
“Yea,” the sturdy dreamers answered,
“To the death we follow Thee.“

Refrain:
Lord, we are able.
Our spirits are Thine.
Remold them, make us,
Like Thee, divine.
Thy guiding radiance
Above us shall be
A beacon to God,
To love, and loyalty.

Totally Committed — Who? — “The sturdy dreamers answered, To the death we follow Thee.”

“Lord we are able” — Who would say that knowing what we know today?

It is not that they were not sincere, but that they were unable, as are we!  Peter learned that when he stepped outside of the boat and began walking.  As he saw and felt the water and the waves, he began sinking.  What happened?  He lost his spirit of total commitment!  Like we would have!  Lord, I believe, help my unbelief!

While a righteous and desirable goal, that goal is unreachable this side of heaven, even with those who walked with Christ for three years on earth and witnessed what we ourselves wish we could have seen with our eyes. [3]. It implies the possibility of total sanctification on this side of glory.

To hold that up as an attainable goal is not only unrealistic but unbiblical and perhaps even dangerous. [4]. We believe that the Scriptures teach progressive sanctification and another day and another place of final glorification.

More, More About Jesus! — THAT is the realistic, biblical, attainable, and righteous aim of God’s people!

“Total Commitment” is a leaky boat that some do not even personally recognize they themselves are in.  Some actually believe and/or preach as if their boat has no leaks!  It leaks as they preach!

The truth is,
all boats are leaky boats!

As previously stated, there is a theological-ideology that promotes such an unbiblical and damaging vantage to God’s people.  It is centered on an ideological framework that marks men like John Mac Arthur (Lordship Salvation), John Piper [5], Dr. John Street [6], and the new Calvinistic movement. [5]

It is unhealthy to preach glibly about being total commitment and thereby leave the impression that such is an attainable goal this side of glorification.  It is destructive, not productive! To speak about total commitment in one area of life, no less in all of life, is hurtful, not helpful!

“Progressive Sanctification” — That has been the historic position of Bible-believing Christianity!

If you want people to feel down and discouraged – ride that horse you think is a thoroughbred.  I say it’s a nag, and it will leave people far short (guilty and dispirited ) of where they could and should be in their Christian life!

What is Total Commitment?

3. Even after the resurrection, they struggled with boldness, with total commitment (Acts 4:29)!  Peter struggled with hypocrisy out of fear (Galatians 2).

4. Who Is John Piper, by Barnabas Piper

5. Listen to these words!
John Piper: “My life’s commitment is to talk about the Bible in such a way that fake Christians feel fake — so that they can be saved.”

Is that really our “life’s commitment” as pastors? Our life’s commitment as pastors is far broader than that singular goal!  Nevertheless, Piper and other pastors have that as their goal as well, and those who listen will see that it is low-hanging fruit, week after week.

Genuine Christians also end up feeling fake when it is this kind of “all-or-nothing” kind of Christianity that people must measure up to in order for them to believe they are saved.  No surprise when people lose their children to this kind of false standard of sanctification!  Ask Barnabas Piper!

6. John Street heads up the counseling ministry of GCC and Master’s Seminary.  It is the same theological-ideology that is reflected in the third counseling video cited in this link.  Street expects a 4-year-old girl, who is being sexually assaulted to come to the place in her life where she understands that what has happened is from the hand of God — Glenda’s Story.  He makes the argument based on Psalm 119 — It is good that I have been afflicted.  He also makes his argument from the life of Joseph, who was hated by his brothers and sold into bondage, as if that is to even be compared to being sexually raped as a 4-year-old.

David’s “affliction” was not the sexual trauma experienced by a child, but exactly what the word “affliction” means in the context of Psalm 119 — to be humbled, put down, or distressed.  God did not afflict Glenda, as God personally and directly afflicted David out of His faithfulness (Psalm 119:75).  If Psalm 119 applies to Glenda, then God would then be the author of terrible wickedness!

None of God’s people jump to spiritual maturity, but we get there over time and through continual and continued spiritual growth!

2 thoughts on “Mac Arthur / Piper / Your Pastor: There is a theological-ideology in play!”