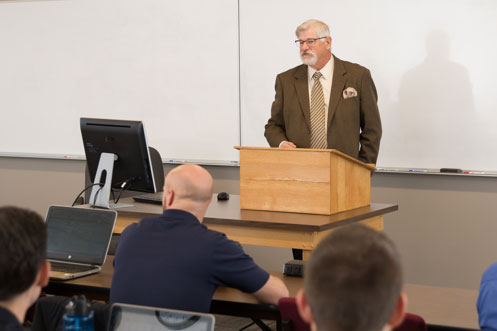 After reading Dr. Kevin Bauder’s (of Central Seminary) blog title “It’s Not News,”[1] I was reminded of the protection ministries receive from those who won’t or don’t call out wrong-doing.

Dr. Kevin Bauder blogged in response to the criticism leveled against “a church that shall not be named” — which is actually well-known and named.  He repeated attempts to make the point that he will not name the church . . . .

. . .  while knowing at the same time that the church and ministry are well known, and if not by any particular reader of his blog, it will be easily “Googled.”

#2) Does Have An Opinion, A Distorted Opinion:

Even though Dr. Bauder says, “I don’t have an opinion.”, he offers his opinion!

“A church member can take no worse action than to carry complaints and disputes beyond the congregation itself. To bring other members into civil litigation is evil. It is inexcusable. To carry complaints to the press—whether secular or religious, whether print or electronic—is worse. It is contemptible. To involve the media in the attempt to sway the internal decisions of a church is worst of all. It is argumentum ad odio, an appeal to bigotry, and it is a shameful thing for a supposed Christian to do.”

Apparently, there are no exceptions or situations regarding wrong-doing or abuse that ought to be called out publicly by those involved — “It’s contemptible.”  RZIM would appreciate that viewpoint!

Dr. Bauder fails to give proper weight to the fact that what is happening at BC&S involves all of us, and not in an insignificant way!  — “Charlei Hebdo Is Us” — BC&S Is Us.  This affects all of us who name the name of Christ and work in ministry.  It went public because speaking to people personally and directly leaves people used, misused, and abused!

AND . . . .Any so-called “sovereign autonomy” was forfeited when a church establishes a college and seminary, and a ministry has wide influence. It has purposefully and powerfully exerted that influence through books, seminars, conferences, and writings.

“The tongue is a fire, a world of iniquity: so is the tongue among our members, that it defileth the whole body, and setteth on fire the course of nature; and it is set on fire of hell.”

Again, Ravi used that same kind of argument against his accusers! Now, some can just quote Dr. Bauder! Dr. Bauder has given a weapon to those who would like to beat down the ones they have abused!

Why can’t that same kind of weaponized Scripture be used against those who seek to expose ministerial wrong-doing?  Could not that passage, and many others, be used to silence and intimidate those trying to “right the ship of state?”  You cannot quote such passages without some applicational principle that distinguishes between sinful self-serving criticism, and legitimate, righteous, and necessary criticism.

That passage (and others) cannot be rightfully applied to those who rightfully seek to correct, reprove, expose, and/or warn others.  If it does apply to all “verbal fires,” then Elijah is “the troubler of Israel,” as Ahab claimed!

“It Is News,” and covering it up, at this point in time, is exactly what wrong-doers hope to accomplish! That allows them to stay in power and make changes only around the edges, around the optics!

The leadership at BC&S is counting on you, Dr. Bauder, to write exactly what you wrote!

Sadly, Dr. Bauder’s opinion falls far short of being balanced or reasoned, and only provides a larger defensive shield to those who use and abuse people in ministries and local churches.   Dr. Bauder’s critical article (which he has little trouble publicly posting against those who call out wrong-doing) doesn’t come close to a fair-minded or even-handed critique!  It only further silences the voices of those who are already reluctant to speak up!

Johnathon Bowers & Daniel Kleven’s courage is to be commended!
Few stand as tall when facing the cost incurred regarding relationships, employment, and/or their families.
It was and is time to speak up and speak out!  They, and others, DID!

2 thoughts on “Kevin Bauder: They Are Counting On You!”